Home Basics God Allah Why Do Muslims Use The Name Allah For God? 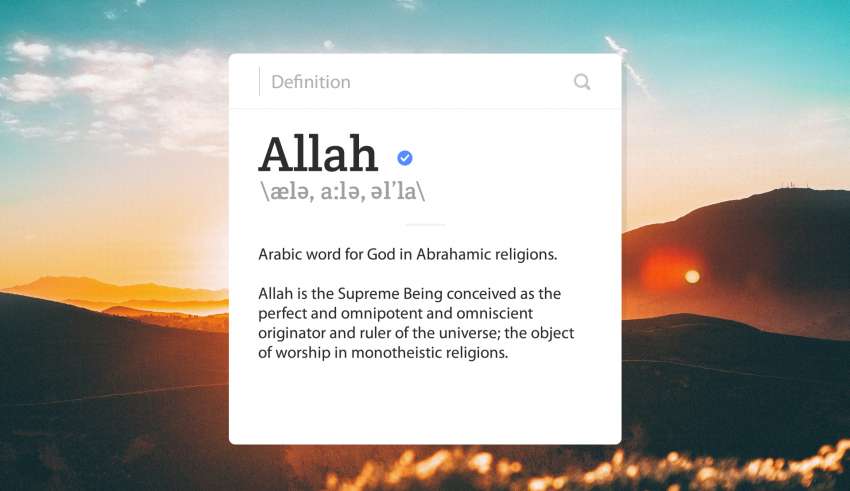 Some people mistakenly think that Allah is the God of the Muslims, and a few even like to claim that Allah is an Arabian moon god. But, the word Allah is simply the Arabic word for God. Every language has a word for God and Arabic is no exception. If you have any doubt, check out an Arabic translation of the Bible and you’ll find that it translates the word God as Allah.

Arabic is considered a Semitic language just like Hebrew, the language of the Torah, and Aramaic, the language spoken by Jesus (peace be upon him). So you’ll find in both those languages that the word for God is very similar to the Arabic word Allah. For instance; the Hebrew word for God is El or Eloh, and the Aramaic word for God is Elah or Elaha. So when Moses and Jesus (peace be upon them) spoke about God they would have used the word very similar to the word Allah. This just goes to show that Allah is the same one God, the Creator of the universe, loved and worshipped by all of His prophets.

“He is Allah, the Creator, the Inventor, the Fashioner; to Him belong the best names.” [Noble Quran 59:24]

Only a relatively small percentage of Muslims speak Arabic as their first language, yet Muslims around the world use the same word for God, Allah.

But why don’t Muslims just use the word for God in their own language? Well, one reason is that since the Quran was revealed in Arabic and Muslims use Arabic multiple times a day in prayer, the word has something of a unifying quality for Muslims. No matter where we’re from, no matter what language we speak, Allah is one word we can all understand.

While there’s nothing wrong with using other words for God, most Muslims are accustomed to using the name “Allah” and many prefer to use it in place of the word for God in their own language. However, a deeper reason that’s often cited is the unique quality of the name “Allah”.

Look at the English word, God. We spell it with a capital G, and we understand it to mean the One True God. But make it a lowercase G, and it can be referring to Zeus, Ganesh, Thor, or anything that people worship. Since capitalization doesn’t come across in speech, there’s really no way to distinguish between God and god. If you add an S it very easily becomes gods and it can become male or female.

On the other hand Arabic has two different words for God and god. The word for god is “ilah” and the word for God is “Allah”. On top of that the name “Allah” is unlike most Arabic words in that it cannot be made plural nor can it take gender. So, when you say Allah, there’s no confusion! You’re talking not about one of many gods but the One and Only God. You’re talking not about a man nor a woman, but the Creator of men and women, capital G-O-D, God.