Famed Irish singer Sinéad O’Connor has a new religion and a new name. The artist, best known for her 1990 star-making cover tune, “Nothing Compares 2 U,” now counts herself among the nearly 2 billion Muslims worldwide and has adopted the name Shuhada’ Davitt.

Clad in a long-sleeved shirt and a headscarf, called a hijab, the new convert accepted Islam at the Islamic Centre of Ireland under the guidance of Shaikh Dr. Omar Al-Qadri. After reciting the Shahadah, which is the Islamic declaration of faith, Davitt also stated she respected all faiths, including Christianity, but reiterated that “My way of life, my religion, is Islam.”

Moving Forward With Her Faith

Much can be learned from Davitt’s conversion to Islam. She struggled for years with her own Catholic faith and continued to seek knowledge and search for the truth. Her study and intelligent reasoning led her to Islam which demonstrates the truth of its tenets and the peace and happiness it can bring to those who accept it as their own personal faith.

Since announcing her conversion, Davitt (formerly O’Connor) has addressed how she came to Islam, which she described as, “The natural conclusion of any intelligent theologian’s journey. All scripture study leads to Islam.” This is in line with the Islamic tenet that Quranic scripture confirms all scripture that has come before it through God’s chosen messengers such as Moses, David and Jesus who transmitted the Torah, the Psalms and the Gospels, respectively.

God confirms this in the Quran,

In fact, throughout the Quran God encourages us to use our intelligence and reason when pondering our Creator, the nature of this earth and even our very existence. God says it is this use of reason and acquiring of knowledge which will lead us to the truth about Islam and, hopefully, to Heaven.

“In the creation of the heavens and the earth, and the alternation of night and day, there are signs for people with intelligence.” [Noble Quran 3:190]

Since confirming her conversion, Davitt has been embraced by a worldwide community of Muslims who sent her messages of congratulation and love via Twitter.

She expressed how much the gestures meant to her, writing,

“Thank you so much to all my Muslim brothers and sisters who have been so kind as to welcome me to the Ummah (nation) today on this page. You can’t begin to imagine how much your tenderness means to me.”

Davitt has also released photos of her herself wearing the hijab, which covers her hair and neck. She said she was gifted with her first hijab and was quoted as being “very, very, very happy.”

Standing Firm in the Face of Criticism

Unfortunately, as a Muslim and especially as a convert, Davitt has already experienced some trials common to those who follow Islam. Via Twitter, the singer detailed some of her early struggles.

“The only Irish person who hasn’t abused me for accepting Islam is my best friend, Elaine.”

Davitt also described an encounter with “a long-haired blonde lady with prejudice (who) questioned me for 20 minutes on why I wanna wear a hijab. But her long hair is just a Western version of hijab! I figure shave it if you’re really against hijab.”

However, Shuhada’ is turning to her newfound faith for comfort in the face of harassment, posting to Twitter the following Quranic verse:

“And already were messengers ridiculed before you, but those who mocked them were enveloped by that which they used to ridicule.” [Noble Quran 6:10]

See What Inspired Her Conversion For Yourself

You might be asking yourself, what could be in the Quran or in her research of Islam that really spoke to her or made her to take the step to convert to Islam.

In the Quran, God invites us to join the pious and reflect on the teachings brought from all of His prophets and messengers. God says,

“And the worldly life is not but amusement and diversion; but the home of the Hereafter is best for those who fear Allah, so will you not reason?” [Noble Quran 6:32]

Do your own research! Take a look in the Quran and the teaching of the Prophet Muhammad (peace be upon him) to discover the way of life as shown through Islam. It may be that the same ideals that inspired Shuhada’ Davitt could in fact be the very teachings that inspire you. 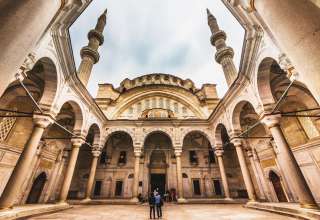