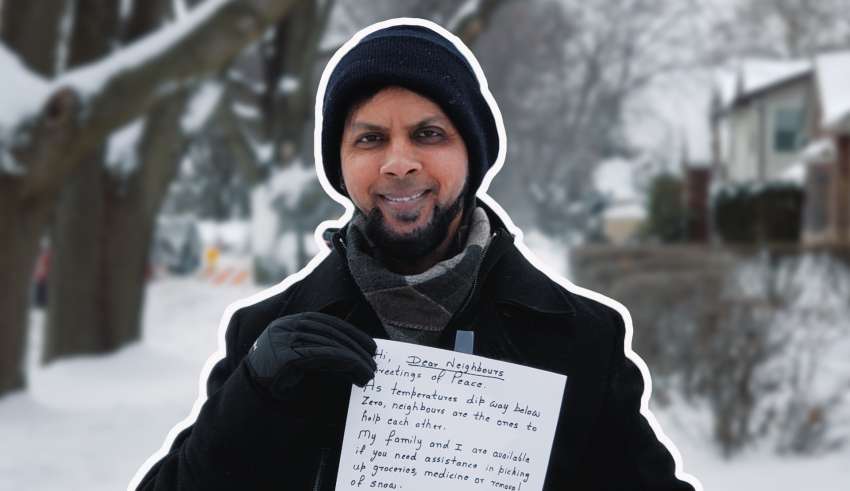 Instead of ducking for cover under blankets near the heater during a brutally cold weather, Sabeel Ahmed did exactly the opposite. The Chicago based Muslim decided to brave the weather and offer help to his neighbors.

Inspired by the example of Prophet Muhammad’s saying ﷺ:

“He is not a believer who eats his fill while his neighbor beside him goes hungry.” [Bukhari]

Mr. Sabeel and his wife, Asma passed out 40 handwritten letters to nearby neighbors with the message:

My family and I are available if you need assistance in picking up groceries, medicine or removal of snow.

The letter also included an invitation to the family of 5’s home for “hot tea and samosa (a savory snack)”. The letter also extended an unconditional offer for help. Sabeel’s daughter, Zainab, made a video message of their offer to help which was posted on YouTube.

Three neighbors responded to the letter. One woman needed groceries, which were purchased and donated by Mr. Sabeel and his wife. Another woman needed snow removed, so he and his son happily obliged. The final neighbor requested some financial assistance, which was taken care of.

As the Executive Director of the organization Gain Peace, Sabeel Ahmed is very familiar with the misconceptions people have about Islam and Muslims. He hopes to educate his neighbors through his actions and speech about the peace, compassion, and generosity Islam encourages all its followers to live by.

“There are so many commonalities we have as humans, as Americans and as people of faith. Hopefully the ice is broken and hopefully there will be more connections made … and neighbors will carry it on, as a ripple effect.”

The effect Mr. Sabeel’s initiative has had is heartwarming. Since news of his neighborly generosity broke, the response he received was abundant. His children were surprised of the national media coverage. Several of his neighbors have emailed him letting him know they too intend to help the neighborhood. Other Muslims have contacted him saying they have been inspired by his example and plan to do the same in their neighborhoods. Mr. Sabeel, his family, and other Muslim families also gathered together and made ‘Blessing Bags’ filled with basic necessities to pass to the local homeless.

Mr. Sabeel encourages all Muslims to be more active in their neighborhoods in order to bring about a positive change to the narrative of Islam and Muslims in society.

“We need to make sure that more non-Muslims are aware of the positive actions of Muslims, thus opening their hearts toward Islam.”

Sabeel Ahmed advises all non-Muslims not to judge Islam by the conduct of a few misguided people, or by the media portrayal. Read a copy of the Quran, study the noble life of the Prophet Muhammad ﷺ, reach out to your Muslim neighbors, or visit a local mosque, then you will see Islam stands for justice, unity, and kindness.

The Islamic Month of Fasting – How it Began? Ramadan, the 9th month in the …